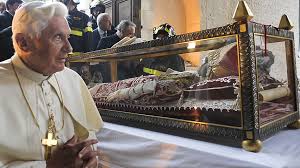 Benedict XVI visits the Basilica of Collemaggio which contains the remains of the relics of Celestine V, the last Pope to resign the Papacy in December of 1294.

Perhaps already in 2009, when Benedict XVI visited the relics of the last Pope to have resigned his office, the idea of resigning the Papacy (renuntiatio) was already present with the immediate-past Pope. Ratzinger (the Pope's given name) must have at some point thought about what his predecessor's act might promise for his own legacy. Dante played an important voice in the formulation of Celestine's legacy; Dante puts Celestine in his Inferno III (he mentions him in XXVII as well), not quite in Hell proper, but with the Neutral angels and lukewarm souls who, to paraphrase the great Geddy Lee of Rush says, have made a choice by not choosing.

Ratizinger is a student of Medieval theology. Indeed, long before he was  a Pope, I read Ratzinger's treatise of the philosophy of history of St. Bonaventure, a Franciscan theologian who had an important influence on Dante. No doubt, Ratzinger knows his Dante. Did he think about Dante's judgment of Celestine V when he made his choice?

For Dante, Celestine's resignation probably irked him most because of its immediate results: the election of Benedetto Gaetani (notice the name--coincidence?) as Pope Boniface VIII, Dante's arch-enemy. But, Dante certainly say Celestine's choice, his Great Refusal in Dante's words, as an act of despair or even cowardice. The papacy then as now, certainly not less but maybe not more, was the sight of political intrigue, factions, scandal, and deceit. Celestine took the hermits path and happily lived out his last year in Boniface's prison. Benedict XVI is a theologian, so we can probably expect new writings from him, but, and this is the question, what has become of the Papacy and of politics in Italy because of Benedict's own Great Refusal?