In Purgatory: An Autobiography


As I approach the conclusion of my year in Italy, my family and I have entered into a waiting period as we try and enjoy our last few weeks in Italy and prepare to return to Oklahoma. Existing in this "in-between" state, reminds me of Dante's Purgatorio.

This blog has been mostly occupied with putting people in Hell, since, as most readers of the Divine Comedy conclude, Dante's Hell is the most fun to read. I think Dante might put it another way, since we are all sinners, Hell is where we all feel most at home!

Purgatorio, on the other hand, is much-less read, but, unlike Paradiso, I believe most modern readers would find it almost as interesting as Inferno. We should all hope to make it into Dante's Purgatory, since residence their promises eventual admission to Heaven while also allowing for us to have "made a few mistakes" in life. Only Saints go straight to heaven, and they spent their lives in hair shirts or gruesomely killed as martyrs (one of my favorites, is St. Lawrence who was burnt on a grill, which explains the name "St. Lawrence" for a grilled cheese sandwich at a pub I used to frequent).

Well, I find myself in Purgatory here in Italy, waiting to move on to the next thing. Dante's Purgatorio echoes with the sound of willing suffering and endured pain. Some of the penitents have to shoulder heavy boulders to cure the sin of Pride. Others have their eyelids sewn shut so as to prevent the envious itch. I know myself well enough to predict that I will spend plenty of time on one particular ledge of Purgatorio: Gluttony. 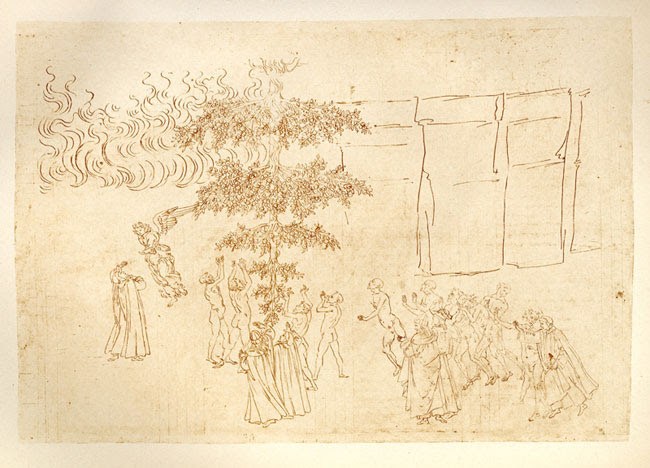 Here the sinners see abundance around them and, like in the famous story of Tantalus, find satisfaction just out of reach. Here is Dante's description of the punishment of the Gluttons from which Botticelli drew the above.

The sinners are emaciated from hunger and parched with thirst, and easy and apt punishment for their gluttony. But they are not being punished, they are being trained to understand that physical sustenance, although pleasurable, should not substitute for spiritual sustenance, Love of God, that will bring true joy. Their hunger and thirst is neither mortal nor eternal.

This will certainly be my Purgatorial fate! But my Italian purgatory is nothing like this; in fact, it is the opposite of Tantalus' annoying quandary. In Italy, I have a cornucopia of wonderful food options at every turn. Indeed, instead of suffering from famine, I have been feasting. Indeed, I think I have discovered the new miracle diet!

I have never dieted before, although when I puffed up to over 180 pounds (I am only 5'9) a few years back, I decided to start “watching” what I ate, which translated to not eating an entire carton of ice cream every two days. From the little I know about diets I gather that they have rules about what you can eat. Some of them also regulate when you can eat. Some of them have points that you use to organize your food consumption. Others involve cutting out entire typologies of foods from your diet. Many diets are so complicated that it takes an entire book ($19.99 in paperback, available at amazon.com) to explain.
Well, my miracle diet is doubly-miraculous. Not only is it effective, but it is so easy that I need not write an entire book to explain it. There is one rule to my diet.

Move to Italy.
The rule is so short and simple that there is no need for a fancy name for this diet. It can just be called the “Move to Italy” diet. I have now lived in Italy for a year, and I have lost about 15 pounds. My BMI has gone from 25 to 22.9.
And now the “miracle” part. I eat whatever the hell I want to eat. My breakfast is a sugary feast, with brioches, cookies, yogurt, granola, and sweet and whole-milky cappuccini. I reliably have an 11 am snack with more coffee, pastries or sandwiches. Pasta for lunch, with salad and salami or other cured meats. Afternoon snack? Of course, sometimes including Prosecco!. Dinner? More pasta, and potatoes, and meat. Let’s not forget dessert(s), which does not inlcude the gelato I require daily. All the while I munch on chocolate bars, potato chips, and even the occasional fruit. Oh yes, I have even started drinking regular coke again. I am in the land of Cockaigne!
If I ate this at home in Oklahoma I would see 200 pounds in the rear view mirror, if I could see around my corpulence. But with my new miracle diet, I lose weight. You might object, thinking that living in a Tuscan hill town I walk much more than in the US. Wrong! I walk to work (or bike) everyday in the US. I also am an active recreational biker in the US as well. In Italy, my activity level has actually decreased.
I have no scientific knowledge of how this diet works, indeed, I have very little scientific knowledge at all. My guess is that it has to do with all the chemicals and perservatives Americans eat in their food. I also blame it on High-fructose corn syrup. On the other hand, I am positive it has nothing to do with vaccinations or the lack of NSA spying on my Facebook activity in Italy. But I don’t care. I am 40 years old and eating everything I want in Italy AND losing weight, a miracle indeed.

But, as I said earlier, Purgatory is not eternal, and moving back to Oklahoma will likely mean that I will need eat more like Tantalus and less like 70s vintage Elvis. And given the Oklahoma heat, that will feel more like Hell than Purgatory.

Please send me some ideas for people to judge by Dante's rules. Who do you want to see placed in Dante's afterworld...and please, no current American politicians, that is just too easy.