La Dolce Vita and the Face of Fraud

La Dolce Vita and the Face of Fraud

Many have celebrated, and many have loathed, Fellini's modernist epic La Dolce Vita. It is a break from so much in Italy's past. It is Rome undone; the Rome of the new suburbs, not of the Roman ruins. Rome as prostitute with debauched suitors trying to win her love.

But, would Dante find Fellini's Rome so different from his Rome or from his Florence? Indeed, how "dantean" is La Dolce Vita? Rather than focusing on the entire movie, which might be seen as Marcello's own descent through the levels of sin in Hell, without the promise of salvation, I would like to look at one scene the renders a final "dantean" judgment on the film. Of course this scene is at the end of the film when Marcello is in his moral free-fall.

The debauched party goers greet the arrival of dawn at the end of the revels by leaving their villa signorile to go out to the beach. Tired from their drinking, dancing, and "debauching" (three times that word already!), they see a group of men doing something novel....working. None of these elites actually has a job, beyond being gadflies, but these fishermen instead are working hard to pull in the bounty of the sea. What emerges from their efforts? A sea monster!

The huge sea monster is a marvel, a wonder. The fisherman swear that they will make a million off of it! The party goers are repulsed and attracted to the beast. Marcello in particular, can't take his eyes off of it, particularly of the all-too human large eyes. He says, "And how it insists on looking at you."

The creature from the deep with a human aspect that hides its monstrosity, reminds me of a central image in Dante's Hell. Geryon. This beast represents fraud. He has the fair face that hides a monstrous body. His face is a lie to hide the wickedness of his essence. 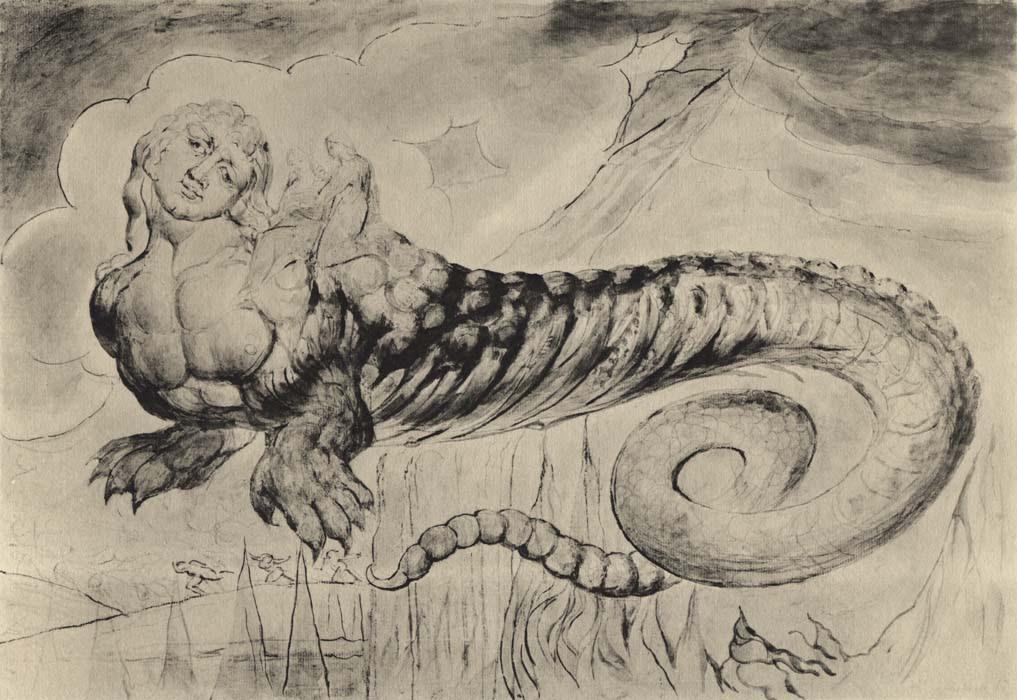 So, why is Geryon at the end of Fellini's La Dolce Vita? First of all, Geryon is the image of fraud and treachery, and I think Fellini is hinting that Marcello has moved beyond his simple debauchery to real moral corruption. The suicide of his friend, the breaking off of his engagement leaves Marcello without a brake on his vice. He is transiting from venial to mortal sins.

In Dante, Geryon also stood in for the risk of Dante's own poetry: telling a lie (the dream vision of his supposed journey) to get at a deeper truth (an ethical lesson). So too, perhaps, the monstrosity of the sea monster reminds us of Fellini's craft as a filmmaker. His interest in spectacle, absurdity, beauty seem to be a cover for a moral critique of contemporary Italian society. How Dantean!

Italytodaywithdante is going to Paris this week! Let's see what Dante finds there to judge harshly (besides the weather!) I can tell you one thing, we are going to go looking for Street of Straw (Par. X).
Posted by Unknown at 5:35 AM