The most surprising result of last month's elections in Italy as reported by most media, in Italy, Europe, and the US, was the continued strength of Silvio Berlusconi's center-right PDL coalition (Partito della Libertà, or Party of Liberty). Let's leave aside the fact that this part plummeted from 48% of the vote in 2008 to 29% in 2013, Silvio Berlusconi had, in the now conventional understanding of the media (controlled by Berlusconi!), had fended of political death to be reborn at polls. But, the below political cartoon captures the public opinion in Italy about Berlusconi's continued, relative, popularity. 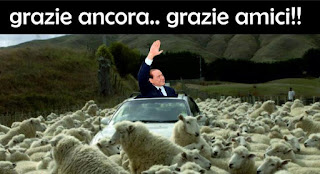 For some reason, Italians keep voting for Berlusconi and his party, despite the near universal knowledge of his corruption and licentiousness. He just won't go away; in fact, Italians don't seem to want him to leave.

What would Dante have made of this man? Berlusconi can lay claim to enough sins, just limiting ourselves to those public known!, to merit placement in almost any of Dante's divisions in Hell. Lust? Oozing out of every pore. Greed? Italy's riches man. Violence against Nature? Look at what plastic surgery has made of his face.

But unlike Purgatorio, it seems the Dante only allows for souls to spend time in one part of Hell, the lowest. So, again, where does Dante put Berlusconi, with such an embarrassment of choices?

Berlusconi's political misdeeds, as well as personal, seem to so venial. He is a slave to his own ego, to his own wealth, to his own personal political image. Indeed, Berlusconi's debauchery is transitory, although not without victims. Dante's lower Hell is reserved for tragic figures who believe themselves epic: Vanni Fucci's disdainful "double-bird" to God, Ulysses's epic self-delusion, Ugolino's monstrosity, not to forget Brutus, Cassius and Judas, whose treachery changed history.  Berlusconi among these great (if greatly evil) souls? No. With the amount of power he amassed as political leader and financial titan of a G7 country for nearly a decade, he could have ruined this country: geopolitical war games, chipping away the Constitution, derailing Europe, or anything else on a grande scale. Instead, he grafted more money for to build his villas while paying nearly underage girls for sex and exotic stripteases. How despicable, how pathetic: what a farce his brand of evil!

So, he goes in the 5th Bolgia of the 8th Circle, with corrupt public officials, just like any other grafting politico trading public trust for a "little taste." Dante portrays these sinners in a little comedic farce that lasts more than two canti; his disdain for this sin might indicate his disgust at the fact that he was accused of this sin as a pretense for his exile from Florence in 1301. What is clear is that Berlusconi's purely political, pecuniary, and petty (although on a grand scale) corruption fits right in with these scheming, cheating, and sly sinners that continue their subterfuge even in Hell. They can chose between boiling pitch or the hooks and claws of the devils that torture them. In any case, their negotiating between these two fates, and empty attempts to bargain for a better fate, mimics their corruption and hidden dealings as public officials.
Be careful both sinners and devils in Bolgia V; Berlusconi is on his way, and he is as tricky as any of you.