Although this cloud will have a silver lining, I can't say that those of us who read, study, teach, and love Dante professionally (Dantisti, we call ourselves) are thrilled to hear about Dan Brown's upcoming new book Inferno, apparently based on the first canticle of Dante's poema sacro (I would typically insert a link here to the website for his book, but he does not need my help). This will likely result in more students in our Dante in translation courses, but what will these students bring with them after reading Dan Brown? To listen to our colleagues in Art History and Religious Studies, who have suffered the collateral damage of his earlier books, these students will have some outlandish ideas.

So, I read the first 10 pages of the book, made available on Dan Brown's Templar's church of a website. I also admit to having read, out of professional necessity, the DaVinci Code and Angels and Demons but not his latest offering to Baphomet The Lost Symbol. Based on this incomplete picture of what Dan Brown will do to Dante I will make outlandish conclusions about where Dan Brown belongs in Dante's afterworld, but like Dan Brown (sans the 3 billion readers), I will come up with the most heinous possible interpretation.

Like Dante's Usurers in Canto XVII, Violent against God, Dan Brown makes profit by unnaturally and wantonly reproducing meanings from symbols.  The sin of usury is violence against god because money cannot reproduce itself, since it is only a symbol of the wealth generated naturally (from work, or from natural resources, etc.), which involves interaction with God's creation.  Dan Brown reproduces art from art. He is not a plagiarizer, but his books profit from the art (and names) of others. His violence is not as much against the individual authors themselves (what does Dante care?), but against the idea of artistic creation, thus against God's originally act of creation. The punishment of the Usurers also fits poetically. They are unrecognizable in their suffering, with the only hint to remind of us their earthly infamy a symbol placed on a money pouch hung from their necks. Their unnatural wealth now weighs them down while offering a possible identification. Dan Brown's symbol? A cross between Harvard and Florence's symbol. The Fleur-de-Lis with Harvard's "Ve Ri Tas" replaced with Am Big Uitas. 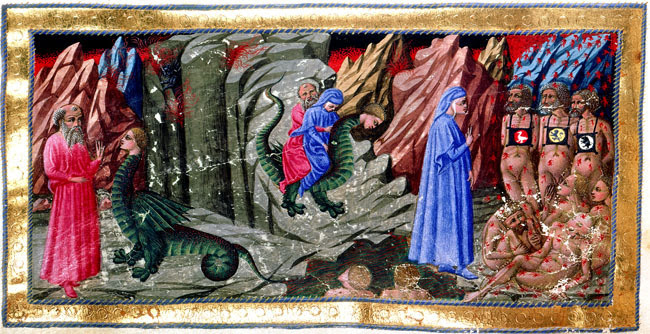 Of course it is not by chance that these sinners also sit on the precipice of the descent to Fraud, only accessible by the beast Geryon, the very figure of literary fraud.

Maybe after reading the whole thing (again, a professional responsibility), I will feel more generous and move him to Purgatorio (Pride comes to mind) or even Paradiso (Love marred by Wantonness, perhaps? Let's leave every possibility open.
Posted by Unknown at 4:11 AM