After my sabbatical hiatus and year in Italy,  I am back in Oklahoma with a full slate of classes and other professorial activities. As I return to reading and re-reading Dante and Boccaccio, listening to my students' impressions and novel interpretations of these two masters, I can refresh my blog with new material. Not living in Italy now, the material will be more focused on Dantean and Boccaccian takes on the New World, but don't be surprised to see Italian subjects appear. Follow my posts for some information, interpretation, and, most especially, entertainment.


My first thoughts reach back to earlier posts in 2013 in which I discussed the advent of Dan Brown's new thriller: Inferno. From almost a year's distance, we can see that Brown's book was almost universally panned as poorly written, and yet, spent a good deal of the year on the top of many lists of bestsellers. None of this is surprising. Dan Brown himself spent part of May in Florence talking up his book in a series of events sponsored by the city itself to bring more tourists to town, as if they needed any goading… Some of my most esteemed Dantista colleagues took time from their intellectual labors to consider Dan Brown's book, with the entirely predictable conclusions that Dan Brown is an imbecilic idiot whose novel proves two things: he neither knows how to read or to write.

Robert Harrison's review in the New York Review of Books is an excellent example:

Harrison's criticisms of Dan Brown cannot be denied; indeed, I made some of the same in my first review of the book on this blog. However, another colleague took a different and, certainly, more original if not bold approach to Dan Brown's book. Deborah Parker, a scholar of Dante and the Italian Renaissance at the University of Virginia, co-authored with her husband, also a literature professor at UVA, a book that attempts to take Dan Brown's book for what its worth and to put Brown in context of other authors/painters/ musicians/ etc… who have used Dante to create their own art.

Inferno Revealed: From Dante to Dan Brown turns out to be a very useful guide for the reader of Dante as much as for the reader of Dan Brown's Dante. It is yet another effort by Professor Parker to make Dante more available to readers today. Her excellent website worldofdante.org has already been the subject of this blog and is cited by Dan Brown in the notes to his Inferno. 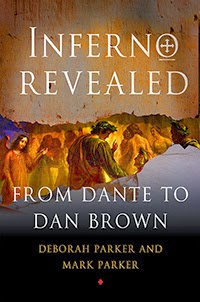 The first half of the book takes a rapid tour through Dante's Inferno giving the reader necessary and nuanced background on many of the important characters and episodes that have made the Inferno standard reading for 600 years. What is key here and what is most surprising is the rich detail of interpretation that the authors can fit into this study. I think most readers of Dante, forget about Dan Brown, would get a great deal of help from the authors' discussions in this book.

The second half of the book looks at the important legacy that Dante's vision of the afterlife had on poets/artists/ and musicians that have come after. The authors note that they will stick to English language uses of Dante, so we find Shakespeare, Milton, Pound, T.S. Eliot, and James Joyce treated with clear and concise sections. Then we look at popular or "lower" treatments of Dante in the contemporary graphic artist Sandow Birk's novel and subsequent animated feature based on Dante.

After all that the authors had accomplished in the first 2/3rds of the book, I found my self reading the Dan Brown sections at the end with a fair amount of skepticism. I have read Dan Brown's book, and I have noted, as others have, Dan Brown's errors, or to be more generous, "misprisions" of Dante. Thankfully, we do not have to read again how Dan Brown fails to live up to the standards set by Dante, or by Milton, Eliot, etc. Instead, the authors show how Dan Brown gets it right while admitting that he got some things wrong. This is not an apology for Dan Brown, but rather, a generous reading of the ways in which the character of Zobrist, the "villain" has a nuanced understanding of Dante's moral system as author of the Inferno.

I am not convinced of the excellence of Brown's novel, but I do not think the authors have that as a goal. Rather, they do well to show how Dante's Inferno, the entire Commedia, have set the stage for others to take up his imagined world, just as Dante took up Virgil's.  But, Dan Brown aside, this book is a great tool for the non-specialist reader of Dante, which is just about all of us. As Dante himself said of his readership: