Besides Popes, nothing exercised Dante's poetic vehemence more than politics. In fact, it was the Papacy's political involvement that so piques his ire in the Commedia. But Dante's anger went far beyond the Popes. Dante himself was involved in politics in his hometown of Florence, before being exiled for life, at the hand of Pope Boniface VIII and a local faction of politics. Dante uses his 6th canti in the Commedia (the scene above is from VI of Inferno) to talk about contemporary politics in an ever-widening context: first Florence, then Italy, and finally all of Europe. In other parts of the poem Dante makes a point to criticize and condemn political leaders and the corruption of his day.

So, what would Dante make of Italy's political situation today? Of course, that question is too broad for one blog entry, or even one blog. So, today I start with the newest and most peculiar entry into Italy's political scene: Beppe Grillo.

It is too early to say what Dante would make of this charismatic leader of the MoVimento 5 Stelle group, which made news throughout Europe for taking nearly a third of the vote in last month's general elections. Grillo's movement is young, popular, anti-establishment, and ideologically incoherent. While I find M5S a compelling story, Grillo is just the next of a type of political phenomenon that Dante himself would have recognized.

Grillo represents the same hope that Italians have for a leader to come to Italy and offer a hope of political unity. In Dante, this idea is best found in the "greyhound" who Dante has Virgil describe in prophesy in the first Canto of the Inferno.

Here's the catch. We have no idea what Dante is talking about with his greyhound and two felts. Did he have hopes for a new political leader to come and unify the factional divisions that were ripping asunder Dante's Italy (the Guelphs and Ghibellines were Dante's PD and PDL or Republicans and Democrats)? Did this greyhound promise reform, unity, virtue? We don't know because it never happened. Dante's Italy remained factional, dysfunctional, and corrupt. So it is today, and Grillo is the next great hope, subject of almost prophetic hopes and near deification among his supporters.

So the jury is out on Grillo. Will he be just another charismatic leader to flash across the Italian horizon and end up a footnote of history? Or we he merit notice of historians and poets, either for hsi fall from grace into the filth of political corruption (INF. XXI-XXII), or we he take his place in the heaven of the just Rulers (Par. XIX-XX)? All across Italy, the monuments to Dante are watching Grillo and the Grillini in judgment. 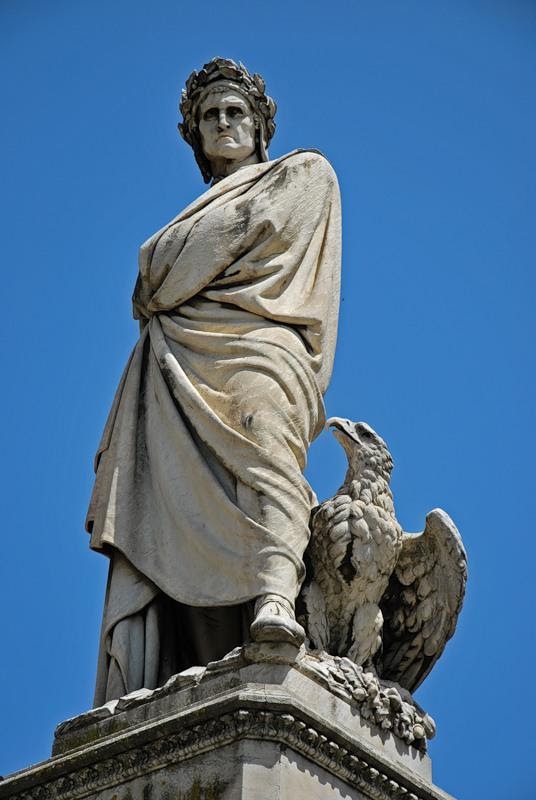