Habemus Papam! I know I am a bit late on the scene, but I was vacationing on the Gargano Peninsula in Puglia and news travels slow there. More to the point; I had no internet connection; Ah, rustic Puglia! I find it more than coincidental that I came to know of our new Pope shortly before visiting the castle in Vieste where the previous Pope to have given up the Papacy. Celestine V, was imprisoned there by Boniface VIII (with the help of the Templars? Dan Brown take note!)until his death.

Bergoglio's choice of the name Francis, specifically in honor of St. Francis of Assisi, distinguishes this man's Papacy from many previous occupants of St. Peter's throne. Bold or audacious? I can only think of two possible names that would have been more striking, Peter II or Pope Christ! Why is it that no man, Italian or otherwise, has chosen Francis as a name when he is, after Christ, the most popular and well-loved Christian ever?

Let's look at what Dante has to say about St. Francis to find an answer to why Francis has been, and remains today, a problematic name for the Pope.

Dante's presentation of St. Francis, as part of a quartet of saints, two Dominican (St. Dominic and St. Thomas Aquinas) and two Franciscans (St. Francis and St. Bonaventure) emphasizes Dante's opinion for the need of reconciliation of competing ideologies in his church.  Our Pope Francis' choice of names, a Jesuit who nods openly to a Franciscan while also possibly saluting one of his own. St. Fracis Xavier, matches Dante's reconciling agenda.

Dante follows the tradition of St. Francis' biographies, already codified in his day, by focusing on St. Francis' rejection of material goods and embrace of Lady Poverty, both material and spiritual. This too, our Francis has done, and wonderfully I might add. His lumbering simplicity in gait and in speech has given him credit with everyday Catholics and others, that goes far beyond geography (being from Argentina) or theology (Liberation Theology). But a poor church was hard in Francis' day, even among Franciscans (even before Francis died, it split his order in two factions); what our Francis means when he wishes for a poor church to serve the poor remains a big question. After all, it takes quite a bit of soldi to build a church like this.

So our Francis is like St. Francis in his humility, simplicity, and poverty.

But Dante saw the contradictions in St. Francis that made him such a unique individual, one that could have been potential dangerous to his church, to his Popes. His the "giullare di dio" or God's fool; a man so resistant to systematic philosophy that his greatest ideological statement is a simple poem. Moreover, the 12-14th centuries in Italy is a hotbed of charismatic heretics preaching poverty and humility (Valdo and Fra Dolcino to name just two). What makes St. Francis a new Christ, the hero of the institutional church?

To understand how radical St. Francis' life was, see this new biography of St. Francis by my old teacher Fr. Augustine Thompson.
http://www.amazon.com/Francis-Assisi-A-New-Biography/dp/0801450705/ref=sr_1_1?ie=UTF8&qid=1363897545&sr=8-1&keywords=augustine+thompson


Now a simple answer to my previous questions. Obedience. Dante calls St. Francis the Archimandrite, the head shephard of the church of his day. The word itself is as "fancy" a word as Dante will use, really an Italianized version of a Greek word he likely found in a specialized dictionary of his day. His readership would have been awestruck with this word, so elegant. But the word itself relates contradiction of the office of head shephard, leader of the lowliest, a fancy word to relate a humble office.

So St. Francis is the lowly leader of the lowest and gets his office from the Pope, to which he pledges obedience (along with poverty, and chastity, the three rules for Franciscans). What does our Francis do with that aspect of St. Francis? His obedience to the Papacy? 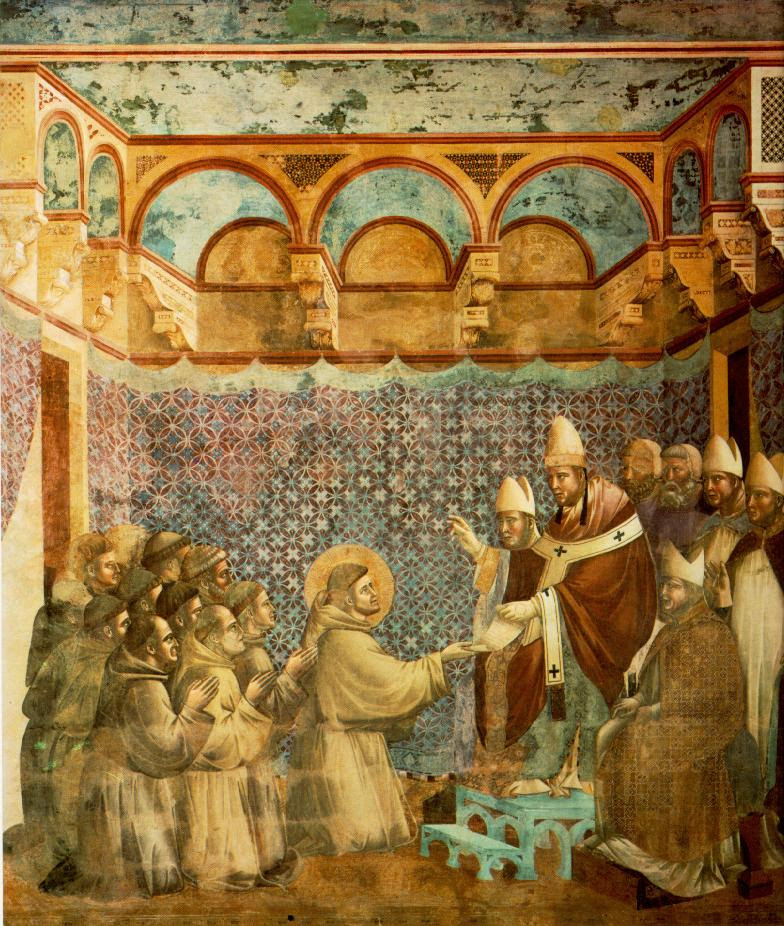 Poverty and chastity and obedience. How can Pope Francis be obedient to the Papacy that he controls? Will he follow the lead of his immediate and living predecessor? Will he be obedient to the forces behind his election? Or, will he be, like St. Francis, be God's fool and really change his Church? If so, maybe he will join St. Francis and others in the joyous dance in the heaven of the Sun.