Don Draper reads Dante! What more could we dantista want then to have the poster-boy for Hollywood cool reading and reciting Dante aloud to begin the new season of Mad Men! 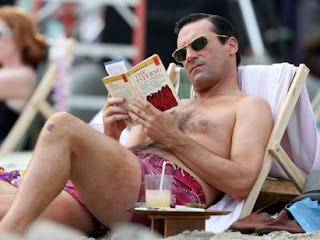 I don't have too much smart to say about what this means just yet, but I will certainly keep an eye on the series this season to see if this thread continues.

If you want a quick take on Don as Don-te (hat tip for the title of this post), see this link:

What did initially strike me was the setting for the opening scene, Hawaii, or America's antipodes. Don does seem to by a Ulysses (Inf. XXVI)character doesn't he? Convinced of his own skill, full of noble intentions, and willing to lead others on his "mad" course away from self knowledge.

What this scene does remind me of his the subject of my next post. How inappropriate Dante's Inferno is for summer (or beach) reading. Inferno is in-vernal. Of course, it is hot in winter in the antipodes!
What do you think Don is doing reading Dante? Leave a comment.
Posted by Unknown at 1:43 PM