Italian media (and the drudgereport.com) are hyping a video from last weekend of Pope Francis, apparently, performing a mini-exorcism on a wheelchair bound Mexican man in attendance at Sunday's Pontifical Mass in Rome. The video shows Pope Francis making his way down a line of worshipers laying hands in prayer. When he arrives to the sufferer in question, he speaks with the priest accompanying the man, takes on a more focused and serious attitude, and lays both hands on the man's head reciting a longer prayer. The man can be seen shaking. Later, the priest with the man reported that  Pope Francis had indeed performed an exorcism, while Vatican officials have been less forthcoming with confirmation or denial. Here is the video.


This is yet another remarkable deed from our new Pope, refreshing in candor, even if likely seen by most as evidence of his dangerous simplicity and transparency. What do I mean? I would hazard to guess that most people, many Catholics, in the west do not believe in exorcism and diabolical possession. Seeing the Pope perform an exorcism might offend enlightened sensibilities.

However, this is more evidence also of Pope Francis' likeness, very intentional, with his namesake St. Francis. St. Francis was fascinated with devils. One famous story has him in Arezzo (where I am today!) expelling or should I say exorcising some devils from the entire city. Here is how Giotto paints it. 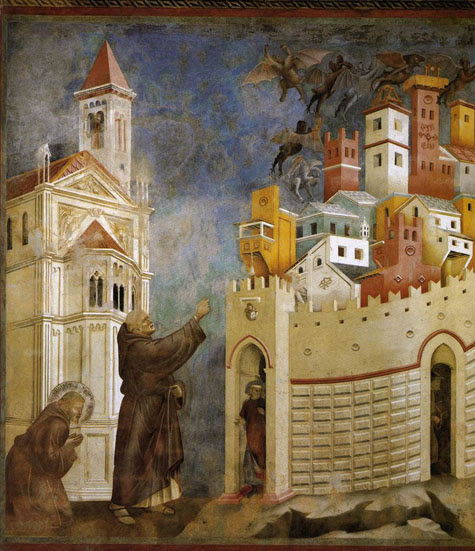 I hope he got them all out!

Dante recognizes St. Francis' belligerence towards devils in our world. Indeed, one of the most well-known passages from Inferno, has St. Francis LOSING OUT to a devil. In Canto XXVII of Inferno, the damned shade of Guido of Montefeltro relates how he, having sinned greatly in life as a crooked political consultant (boy, does he have lots of company now), tried to make up for his life of deception by joining the Franciscan order at the end of his life. Tricked by the sitting Pope (Boniface VIII) into continuing his evil ways even after becoming a Franciscan monk, Guido finds a surprise when he dies. To quote one of my favorite undergraduate professors who, when playing a recording of Hildegard of Bingen, preluded a change in vocal tone with these words...  "Here comes the Devil!"

So Francis is fooled, and the devil outwits him. Or at least that is what the soul of Guido wants us to believe. As I tell my students when I lecture on this canto, be careful in reading the words of Dante's sinners: liars in life continue to lie in hell. Do we really think St. Francis would have gotten this wrong?

So, St (Pope) Francis and the devil. Yet another moment when medieval meets modern in today's Italy.
Posted by Unknown at 12:59 AM